This page is a means to collect and share information collected about updating Grote CNC freestafel.

Our Grote Cnc Freestafel could use an upgrade. The software is installed on one computer and there is no installation software so if this computer crashes we are without. A project to look into possible replacement of parts of the system is probably sensible. The problem we are facing is that there is no pressing motivation since the machine is working fine as it is now. It is nice that you can import or create designs on the CNC computer. Best to see if we can work to a similar but better workflow.

On the other hand - the worflow of an adhoc `Draw something and cut' is really rather easy.

German/English software without any development or support. 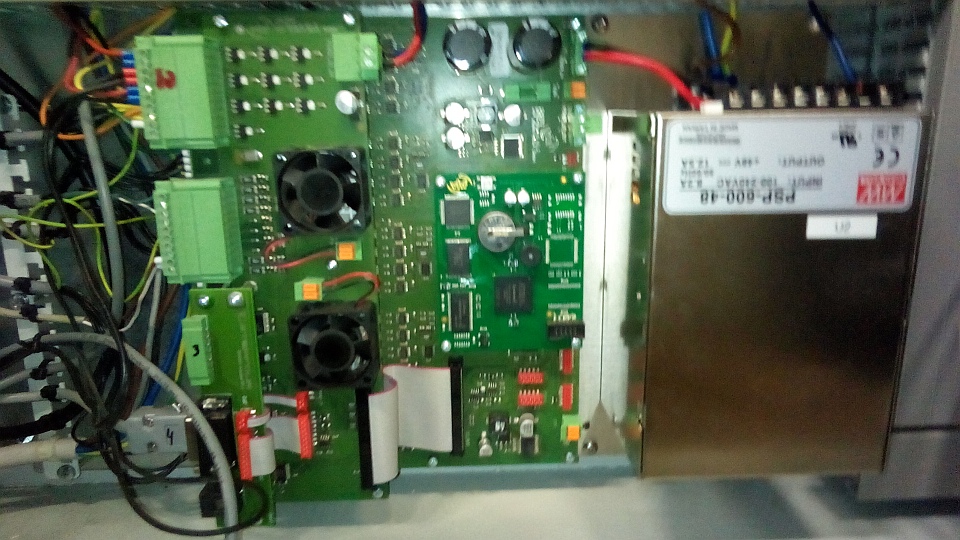 A shiny happy CNC machine with lots of possibilities.

So in general there is

Our current software does, for simple things all 4 in one go. And for complex things - can combine all 3 steps. So you are telling it things like cutter size, length and if it is an inner our outer curve `late' in the process.

This lets you experiment and tweak. But this type of software is rare.

In industry - it is traditional (as you make lots of them identical things) to do this early in the process (were people are expensive) - and allow little control/deviation when at the machine (as you do not want experiments here - but are focused on production). So you dis-encourage tweaking and changes once you are 'at' the machine. And there is a lot of high quality software to support us here.

Obviously - in a makerspace - the latter is not quite ideal for us - even though there are more software options.

So the trick is to find a middle ground.

Inkscape is a professional vector graphics editor for Linux, Windows and macOS. It's free and open source.

Fusion 360 Alternatives SolveSpace is totally free and available on a variety of platforms, including Windows, Mac, and Linux. In terms of features, SolveSpace is remarkably similar to Fusion 360 and stands up relatively well as an open-source alternative.

Usability: no review yet. Only cam.

Usability: medium.. good for modeling, but you still need a way to convert to cam. There is BlenderCam, but there is not much development at the moment (unfortunately).

F-Engrave is a text or image to g-code program (for both engraving and v-carving) that is written in python. Uses CXF and TTF fonts. Imports DXF and Bitmap images.

Toolpath generator - takes 2 and 3 shapes and turns them into a GCode toolpath.

Drivers is maybe not the correct word to describe this section. This is more ‘send to’ driver software. Our current software is not 'just' a driver. it is the whole chain.

Mach3 turns a windows computer into a CNC machine controller. It has enough features and is tweakable.

Mach4 is the newer version for better use with very large files.

Mach3 was primarily designed for the parallel port which has become obsolete. Still hobbyists standard. And drivers for usb or ethernet available. Also lots of tutorials on YouTube.

With CAMotics, you can simulate 3-axis GCode programs for CNCs and visualize the results in 3D.

Cannot make toolpaths by itself. But useful as a lot of the workflows in this page require making a toolpath without the machine.

A full featured gcode platform used for interfacing with advanced CNC controllers like GRBL and TinyG. Universal Gcode Sender is a self-contained Java application which includes all external dependencies, that means if you have the Java Runtime Environment setup UGS provides the rest.

Hardware 'mix' of sender and driver

Tools such as https://www.aliexpress.com/item/32949051740.html are a mix of both above CNC players and below Driver electronics - usually combined with stepper controllers and VFD.

Review/comments: I(Arie) had a look at several of them. They do raise some questions.. we probably need a slave axis. Can they do this? And if so, can you home them separately to square the gantry? (DW: the single axis models can drive two drivers -- but not home them independently).

Probably no possibility to adjust/create gcode.

Review (Arie): I have this board for a while now. Easy to set up. I/O easily implemented. Slave axis possible but no independent homing on slave axis unfortunately.

Most makers, who use any cnc device on the space and filled in the survey, use or have used Inkscape to generate mostly 2D related stuff. For 3D Fusion 360 is used by several members. Most don’t bother to generate gcode because XpertMill, lasercutters, 3D printers have (proprietary) software that does this for them. Most export to dxf or svg format which these software packages can handle.

Ok enough of this. There are others who already did this better: [CNC Cookbook]